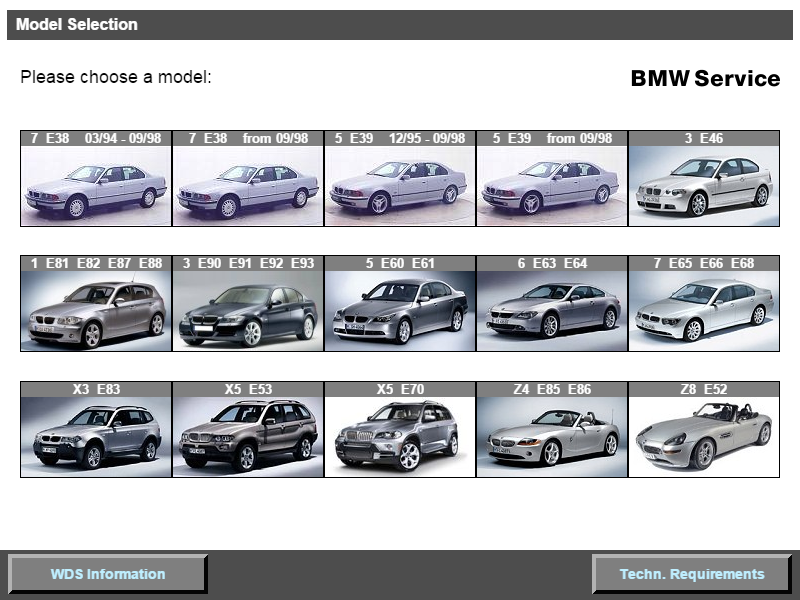 The difference from the original BMW released version and ours

Biggest difference as of April 2021: For users with any version of Internet Explorer 10 and newer, there is NO reason to install Java. The only users who will need the Java Runtime (JRE) are those who have Internet Explorer version 8 or 9!

Bonus: While Internet Explorer is the preferred Browser, and must be present to successfully install the new WDS, the WDS can also be opened on any of the currently available Windows browsers - Edge, Chrome, Firefox and work perfectly.


About the original BMW version:

The WDS from BMW is readily available from many sources but they ALL share one common issue. They were designed and intended to work with a specific configuration - one that is no longer easily possible to duplicate with modern computers.

The original intended system was a version of Windows with Internet Explorer 5.5 through 7, running the Adobe SVG Plugin, with JavaScript and the Java Runtime environment.

In other words Windows XP or older operating systems, that had NOT been updated to Internet Explorer 9. 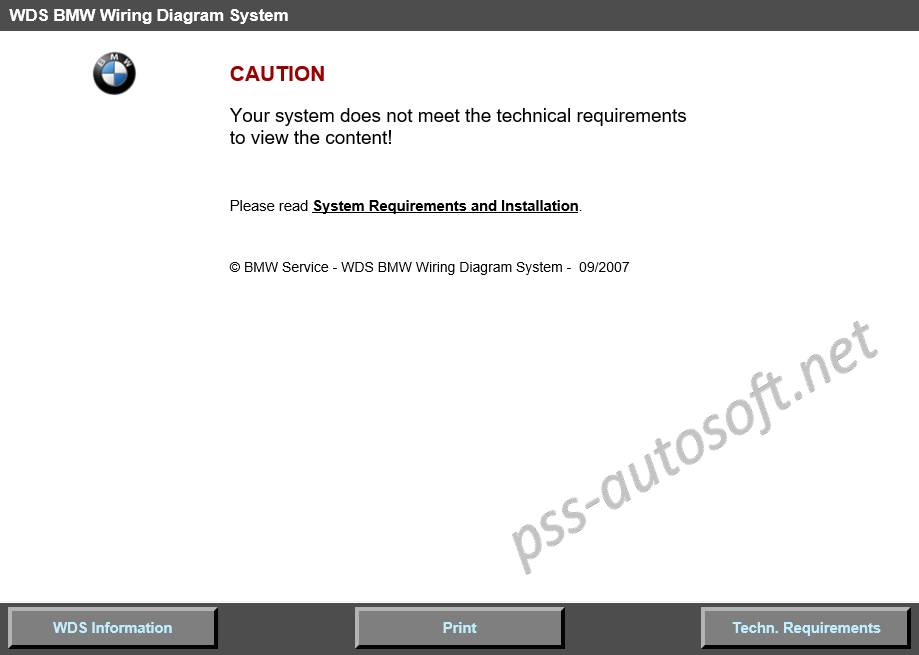 NOTE: This is for ORIGINAL BMW or MINI WDS, not ours!
What other sellers don't want you to know or see until they've got your money:

This issue is hard-coded into ALL the original BMW or Mini WDS.

So for those who are using any current version of Windows, these requirements eliminate everything past Windows 7.

For Windows 7 or Vista this is only if Internet Explorer 7 or 8 is still installed - which with the Microsoft automatic updates, pretty much eliminates both Vista and Windows 7 too.

And really, nothing else will function. Period.

If you did try to make it work on something else you were limited by the issue of the original image files being specifically coded for use with the Adobe SVG plugin (which is obsolete since modern browsers have built in SVG Support).

This special coding was what made the original WDS so powerful. (See the above "Help" button) Each image had links embedded into the file that would allow you to instantly jump to any related system in the navigation tree, which allows user to quickly track a circuit and all its branches.

Unfortunately there are many vendors offering a BMW or Mini WDS that is not at all usable under normal conditions. In order to make it work you have to play with the settings in Windows, change operating systems to use it at all. And naturally no seller tells you this before you purchase.

That means that for the original distributions, when used on any system other than the operating systems/browsers that met these requirements, you could (with tweaking) at the very best view the images for the diagrams, but not navigate to any related images or documents.

This video highlights the problems with any standard BMW or Mini Wiring Diagram System (WDS) DVD. The first portion shows you a functional use - on Windows XP with an early Java Runtime installed. Then we show on Windows Vista, Windows 7 and finally on Windows 8.1.

Then we finish the video with the original, fully functional pss-autosoft.net version of the BMW and Mini WDS on a single DVD. running on the same Windows 8.1 system. This is the old version, without the remastering of all the data files to eliminate the need for the Java Runtime Environment.

At the bottom of the page you can see the current pss-autosoft.net Remastered WDS running on Windows 10 (64 bit) without the Java Runtime installed. 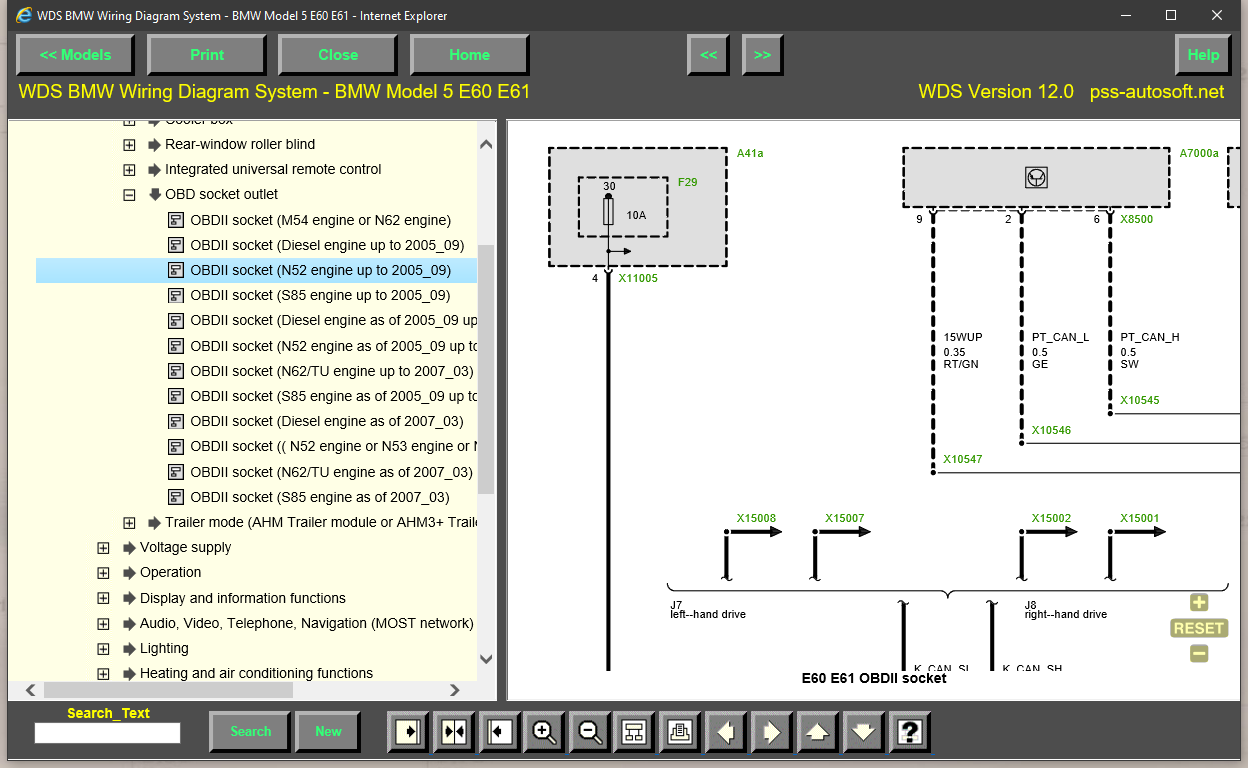 And by function correctly we mean, the internal testing to validate the operating system and browser, the internal links are all 100% functional. It does not matter if you have a 32 bit or 64 bit version of Windows, it works.

We rewrote almost all of the internal HTML, CSS and JavaScript to allow the BMW or Mini WDS function on your modern computer system - all you need is to provide a PC which has some form of Windows from XP onwards, and has Internet Explorer.

The system as written runs directly on your PC, utilizing about 1.9 GB of disk space.

What is different in the pss-autosoft.net WDS from the original BMW release? The original BMW and Mini release contained just BMW or Mini files, and included all available languages.

Our version includes both BMW and Mini on a single DVD but has only a single language. All languages are available individually.

Note that the content is identical between languages EXCEPT for the text. All images, diagrams etc. are the same in every other respect other than the written language.

What You Need to have:


NOTE: If your system is missing any of these software requirements, they are all included as part of the installation process! (Except for Windows and the Internet Explorer which you must provide!)

Above you saw a video of the failures of the standard BMW or Mini DVD that you will find from many sources, ebay, Amazon, forum shares. And they all share the same faults - they will NOT work correctly, if at all, on any thing other than the intended browser or operating system.

With the pss-autosoft.net BMW and Mini WDS you get 100% functionality. You don't have to find an old computer to run it on, you do not need to get a system with a XP Virtual machine (as some have done and sold - where is the COA for that XP install??), you just install the program we provide and run the WDS.


This is a video captured from a system using the pss-autosoft.net WDS system on Windows 10 64 bit. We run through many of the functions, and the WDS is running natively on the Internet Explorer 11 without any faults, or Java needed.